With the NFL in full swing and fans having football to enjoy every day Sunday until February, that also means plenty of users are flocking to gambling apps worldwide. With the repeal of PASPA in 2018, the US iGaming has continued to evolve and regulated gambling is now available to many Americans.

With the hopes of monetizing and advancing their brands further, NFL teams have made several exciting partnerships with sportsbook, casino and fantasy operators.

As the market has grown and more states have opened, that also means NFL teams have been able to get involved. As the US market continues to develop, we believe there will be even more of these deals to come!

Keeping all that in mind, we’ve decided to breakdown what partnerships NFL teams have made, depending on the markets they find themselves in, along with outlining why these deals are so vital to both NFL teams and their iGaming partners. The NFL is also making sure to support responsible betting and recently launched a campaign to further that as they begin to educate users with this public awareness program.

Why Are These Partnerships So Vital?

The NFL is a massive part of the iGaming market, as many users find their ways to operators because of their fandom for the sport. For a long time, NFL teams couldn’t capitalize on this, but as regulations have changed, NFL teams have begun to take full advantage.

For a league that’s targeting a similar demographic to the iGaming world, these partnerships are paramount and can help NFL teams further monetize their brands and users bases. There are many users wondering how to legally bet on NFL games, meaning there’s a massive opportunity here.

That’s not to mention that these deals also provide brand awareness for the sportsbook, casino, or fantasy operators as well. These are truly win-win deals for both sides and as sports betting becomes further regulated in the US, these types of deals will continue to be commonplace in the NFL for many years. Now that you’ve read about the value of the partnerships, let’s breakdown the actual partnerships!

The majority of NFL teams find themselves in states where sportsbooks can operate, which means they can look towards a variety of partnerships in the iGaming world. A lot of firsts have taken place with this group of teams, like with the Washington Football Team who was the first NFL team to partner with an online-sports gaming platform in FanDuel. The New Orleans Saints were the first to make a deal over naming rights, striking a landmark deal with Caesars Entertainment to name their stadium the Caesars Superdome earlier this year.

On the other hand, some teams chose to stay local with their partnership choices, like the Buffalo Bills who partnered with the Niagara Falls-based Seneca Nation back in 2019 to serve as their Official Casino Partner. They also recently partnered with FanDuel as their new official mobile sports betting partner. 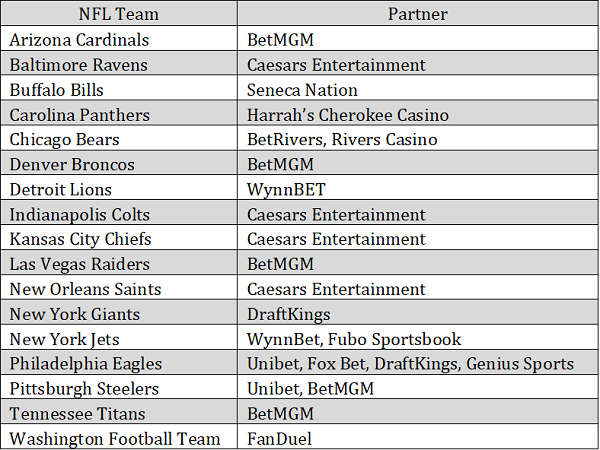 Not every NFL team has the same options available, as regulations for sportsbooks haven’t been passed across all states. As they could not go in that direction, they chose to go towards another lucrative vertical with Casino partnerships.

Most of the teams in this category chose to go with Casino brands that operate near to them, while the Houston Texans went one of the largest Casino brands in the world and partnered with Caesars Entertainment.

Another interesting example is the Seattle Seahawks, who are partnered with a known Seattle brand in Snoqualmie Casino. The State of Washington recently changed their rules on sports wagering, as sports betting will be available on the premises of tribal casinos. This could open the Seahawks up to new or expanded sportsbook partnerships in the coming months.

Similar to the above teams, this group of teams operate in states where sports wagering is not regulated yet. However, these teams chose to go with Daily Fantasy or yearly Fantasy partnerships instead. The list showcases a variety of emerging Fantasy/DFS brands, like the Miami Dolphins working with Monkey Knife Fight and the Atlanta Falcons working with Prize Picks.

As was the case with the Seattle Seahawks, the Florida-based teams could be set up for new deals in the future as well. Sports betting rules changed in Florida in early 2021 but those changes are still pending and would also be available on the premises of tribal casinos.

No Announced Partnerships Yet:

While most NFL teams have been able to enter partnerships with sportsbook, casino, or fantasy providers, there are still three NFL teams who aren’t actively involved in those kinds of partnerships. The Cincinnati Bengals have partnered with Low6 to launch free-to-play games earlier this year, but that’s the only real deal of note for these teams. As regulations change, this could change quickly.*Update: Ohio recently legalized sports gambling, with hopes that it can be set up for sports fans by early 2023.

Key Opportunities on the Horizon

It is certain that sports betting and the NFL will continue to be intertwined over the next several years. This is a massive area of growth for the league and as regulations change across the country, teams will continue to branch out in the iGaming market to further monetize their popular brands. The NFL isn’t the only one benefitting though, as operators are gaining much more visibility through these deals. With both sides continuing to profit from these deals, they won’t be going away anytime soon.

NFL Marketing Blitz: Has it Led to Substantial Gains for Sportsbooks?