The FIFA World Cup is underway and to help players get into the football spirit, Dragonara Online has teamed up with Evolution Gaming to bring players Live Football Studio, a completely unique gaming experience with a football twist.

What is Live Football Studio?

Live Football Studio is a super-fast two-card game, set in a football-themed environment, in which the game hosts engage in match commentary, goal celebrations and football chat while the cards are being dealt. The football-enthusiast presenters host the game in a sports commentator style, immersing players in the world of top-class football and covering real live fixtures involving the world’s top national and club teams.

The gameplay itself is very simple – two cards are dealt, face-up on a football pitch-style table and players bet on a Home or Away win or a Draw. To enrich gameplay, there are statistics on recent game results to help players predict the outcome of future rounds.

Each round only takes 25 seconds, so there is always a new deal coming up soon, keeping players interested and engaged.

The game is optimised for desktop, tablet and smartphone play, ensuring the best possible experience no matter what device Dragonara’s players are on. Moreover, the game is also optimised for both vertical and horizontal layouts. Whichever way players look at it, Dragonara’s Live Football Studio will look great on a smartphone.

The Live Football Studio is available to Dragonara players 24 hours a day, 7 days a week, so the excitement never ends!

Live Football Studio is a world-class, football-focused gaming experience that your players won’t want to miss. We have added a new banner set to the platform, which highlights this awesome new game and will help affiliates attract new players. 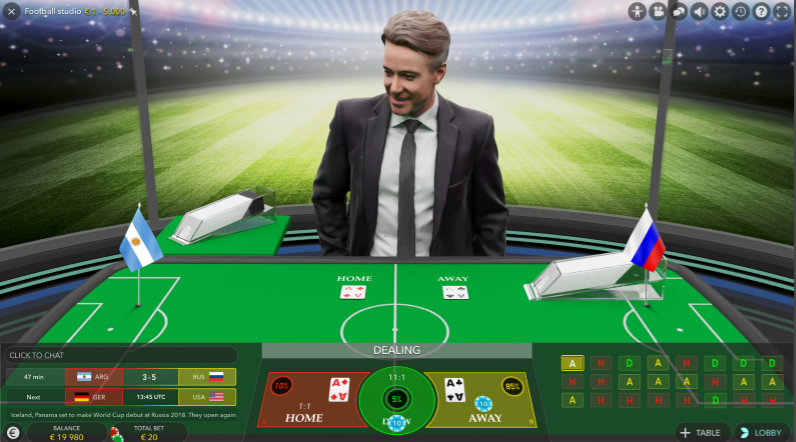 Don’t forget Dragonara recently launched an all new Welcome Bonus Package, the overall vision of which is to ensure that their very best players – the ones making those higher deposits - can reap the benefits of their dedication by enjoying higher match bonuses and even more bonus spins.

Since its launch, this bonus has proven to encourage higher player deposits, with users eager to make the most of this great deal. For this reason, Dragonara’s affiliate partners are really loving it!

The FIFA World Cup is a huge event that provides excitement to billions of fans all around the globe. By adding the Live Football Studio game to their repertoire, Dragonara is creating an association with the FIFA event, which is expected to bring in more traffic and new players to the gaming site.

So sign up as an affiliate today and promote Dragonara and their exciting Live Football Studio game!

The Income Access team is made up of professional content writers. They have academic and professional backgrounds in journalism, public relations and marketing. Experts on the iGaming industry, the team write press releases, blogs and feature articles for Income Access and the company's partners.